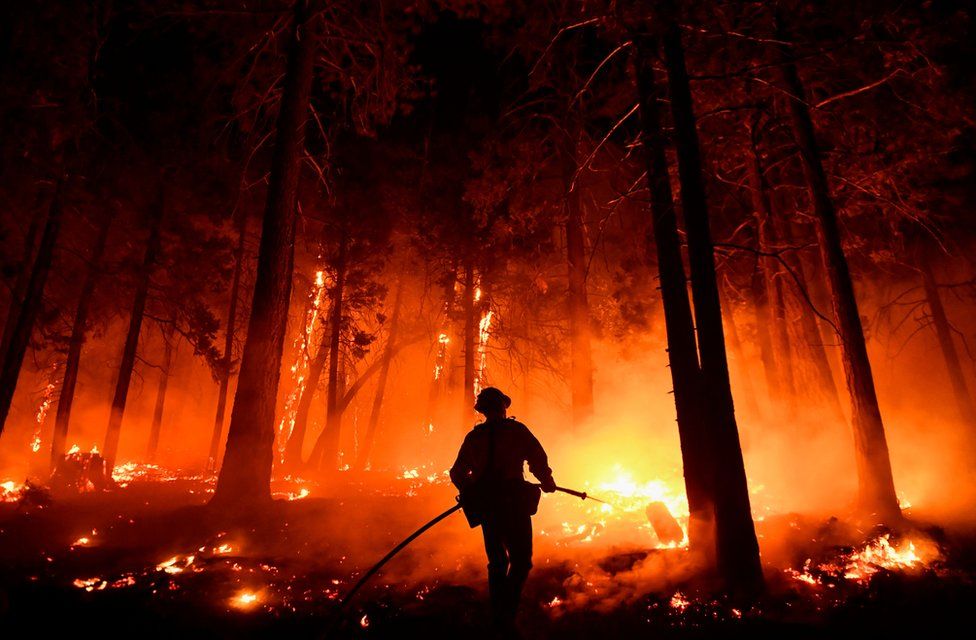 California’s giant sequoias are symbols of permanence – with some living for thousands of years. But the fierce wildfires ravaging the state threaten even these mighty trees, which are among the longest-lived organisms on Earth.

There is something primeval about giant sequoias. Their weird, broccoli-like branches wouldn’t seem out of place with a long-necked dinosaur plodding by.

And they are impossibly big: 30 or 40 people would have to link hands to hug the largest ones. The tallest trees are 90m (295ft) high. That’s like a 30-storey tower block.

“They make you feel deep time”, sighs Christy Bingham, as she looks up at the biggest tree in the world – known as the General Sherman.

“You can just sense standing here that this tree was born before Jesus.”

Christy lowers her voice as she says this, as if out of respect. She’s in charge of conserving these magnificent trees in the Sequoia National Park in the Sierra Nevada mountains – their last redoubt.

Sequoias live so long because they are exquisitely adapted to their environment, Christy tells me.

There have always been fires in California and, in response, sequoias have developed insulating bark which can be up to a metre thick and which stops all but the hottest fires damaging the trees.

But California’s fires are changing. Christy leads me deeper into the forest, to show me what she means.

All you can hear is the sound of the wind in the leaves, the occasional cry of a raven and our footsteps crunching in the leaf litter. It is heaven. Until, that is, we walk over a ridge and the scene changes dramatically.

“This is what I wanted to show you, this was a giant sequoia grove”, she says. The landscape is monochrome now: grey or black, ash or cinders. Many of the huge trees have been reduced to columns of charcoal.

“Before 2015 no one saw a sequoia that looked like this,” says Christy. She is crying now. “You never saw a tree become a candle and burn up in this way before.” She points to the blackened remains of one of the biggest trees.

Christy wipes her tears with the sleeve of her jacket. “It will not sequester any more carbon. It will not be a spotted owl house. It’s dead.”

It isn’t just California’s trees that have been suffering. Several hours’ drive north we visit the Gold Rush-era town of Greenville. It used to be famous for its Wild West-style clapboard shops and its white painted church with its elegant wooden spire.

All that is gone now, incinerated in the massive Dixie Fire this summer which burnt a million acres and cost some 600 million dollars to fight.

Nichoel Farris tells me how she got a text telling her to get out of town. An hour later the whole place – 1,500 buildings in total – had been erased, and her “forever home” with it.

“It took all the colour out of my life. Look, everything is just a shade of grey”, says Nichoel, gesturing towards the ashes of her house. “We lost the future we’d planned for and built.” She’s crying now. “We lost our story”, she tells me.

But Nichoel hasn’t lost all hope. She talks about how she wants to see the town rebuilt using the latest fire protection knowhow. She and her husband grew 80% of their food on their land and she hopes others will do the same.

“Greenville could actually be a lighthouse community of sustainability and climate adaptation. And how we live in our new normal – because big fires are now the new normal,” she says.

And, in the forest, Christy hasn’t given up hope either. She expects to see baby sequoias sprouting here next year. They like burnt soil. And she says the forests need to be better managed, with dead wood and brush that can fuel fires cleared away.

What’s more, a few of the trees, even here amongst the destruction, will survive. Christy starts to scrape with her fingers at the charred bark of a giant sequoia at the very edge of the grove.

Not far in – about an inch or a couple of centimetres – and the charcoal gives way to reddish bark. “This is just surface damage,” she says. “Look up at the leaves, lots of them have survived. This tree will live!”

The resilience of the sequoias should inspire us, says Christy: “It is telling us we need to act on climate change now and that every little bit counts”. She turns to look me in the eye.

“Every carbon reduction will help these forests persist,” she says. And I notice her smile has returned as we walk on through the trees.