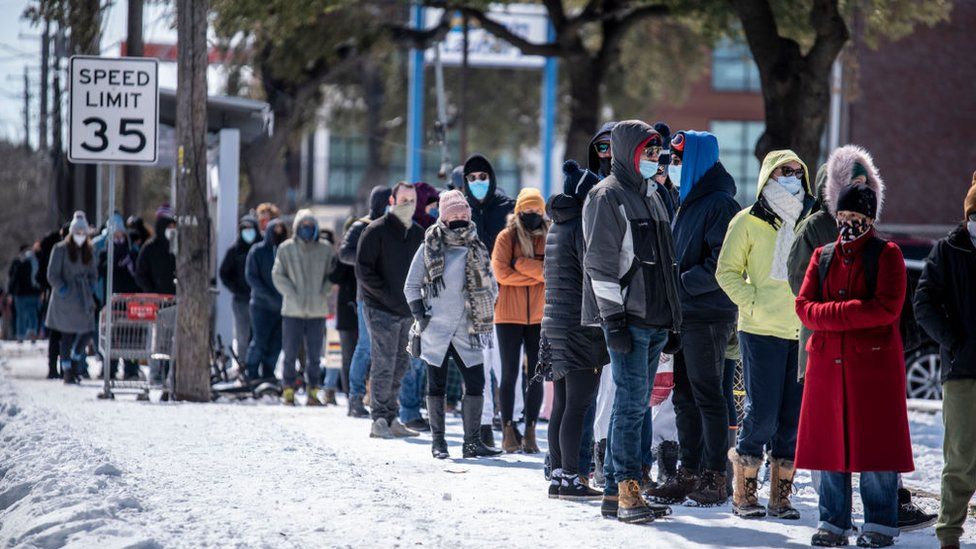 A new study shows that increases in extreme winter weather in parts of the US are linked to accelerated warming of the Arctic.

The scientists found that heating in the region ultimately disturbed the circular pattern of winds known as the polar vortex.

This allowed colder winter weather to flow down to the US, notably in the Texas cold wave in February.

The authors say that warming will see more cold winters in some locations.

Over the past four decades, satellite records have shown how increasing global temperatures have had a profound effect on the Arctic.

Warming in the region is far more pronounced than in the rest of the world, and has caused a rapid shrinkage of summer sea ice.

Scientists have long been concerned about the implications of this amplification of global change for the rest of the planet.

This new study indicates that the warming in the Arctic is having a significant impact on winter weather in both North America and East Asia.

The researchers detail a complex meteorological chain that connects this warmer region to a rotating pattern of cold air known as the polar vortex.

The authors show that the melting of ice in the Barents and Kara seas leads to increased snowfall over Siberia and a transfer of excess energy that impacts the swirling winds in the stratosphere above the North Pole.

The heat ultimately causes a stretching of the vortex which then enables extremely cold weather to flow down to the US.

There has been an increase in these stretching events since satellite observations began in 1979.

The scientists believe this vortex stretching process led to the deadly Texas cold wave in February this year.

“We’re arguing that melting sea ice across Northwest Eurasia, coupled with increased snowfall across Siberia is leading to a strengthening of the temperature difference from west to east across the Eurasian continent,” explained lead author Dr Judah Cohen, who’s a professor at the Massachusetts Institute of Technology (MIT) and a director of Atmospheric and Environmental Research, a weather risk management company.

The researchers say that their findings are based on both observations and modelling and they show a physical link between climate change in the Arctic, the stretching of the polar vortex and the impacts on ground.

The authors believe their work could improve predictions about the onset of extreme cold winter events.

“One of the benefits of this study is that if you recognise these precursors and you know the conditions that are favourable for triggering such event, then you get to extend your forecast lead time,” said Dr Cohen.

“In Texas, people could have certainly prepared better with better warnings, some people froze to death in their homes and perhaps they could have gone to seek shelter.”

Looking at the bigger picture, the research team believes that their findings will help people understand that global warming is complex and perhaps dispel the idea that colder winters mean climate change isn’t happening.

“There has been a long-standing apparent contradiction between the warmer temperatures globally, however, an apparent increase in cold extremes for the United States and in northern Eurasia. And this study helps to resolve this contradiction,” said fellow author, Prof Chaim Garfinkel from the Hebrew University of Jerusalem.

“In the past, these cold extremes over the US and Russia have been used to justify not reducing carbon, but there’s no longer any excuse to not start reducing emissions right away.”