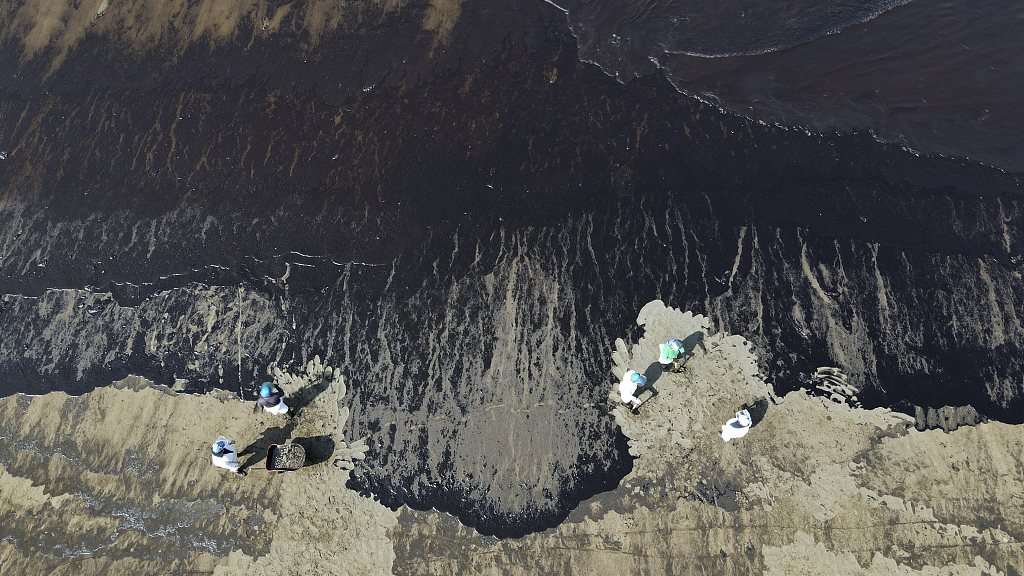 The spill, blamed on unusual swells caused by a volcanic eruption thousands of miles away in Tonga on Sunday, has dirtied waters and beaches along Peru’s Pacific coast, with dead birds and seals washing up on shore.

“We are at a critical moment in environmental matters,” said Castillo, before signing the emergency decree on one of the beaches hit by the spill. “This is the most worrying ecological disaster on the Peruvian coast in recent times.”

“We cannot shy away from responsibilities, it is about assuming them, in this case the company that caused this ecological disaster,” he added.

A spokeswoman for La Pampilla refinery, owned by Spanish energy firm Repsol (REP.MC), has said the firm was not responsible for the spill and blamed the Peruvian Navy for not issuing a tsunami warning after the Tonga eruption.

A worker stands near a dead sea bird as he and his colleagues clean an oil spill caused by abnormal waves, triggered by a massive underwater volcanic eruption in Tonga, off the coast of Lima, in Ventanilla, Peru January 19, 2022. REUTERS/Angela PonceRead More

Unlike other Pacific countries, Peruvian authorities warned of unusual waves only after the eruption.

Environment Minister Ruben Ramirez has said that some 6,000 barrels of oil were spilled in the incident, which has left oil on 21 beaches.

Repsol said in a statement on Thursday that a team of divers was exploring underwater damage from the spill, and said it had deployed more than 2,500 meters of containment booms and 10 boats to recover oil from the sea.

“We regret not having adequately communicated all our commitments and the actions that have been carried out to address the impact,” Repsol said, after facing criticism for its response.

2022-01-21
Previous Post: Indonesia aims to get mangrove restoration back on track in 2022
Next Post: Pristine coral reef unblemished by warming oceans found off Tahiti