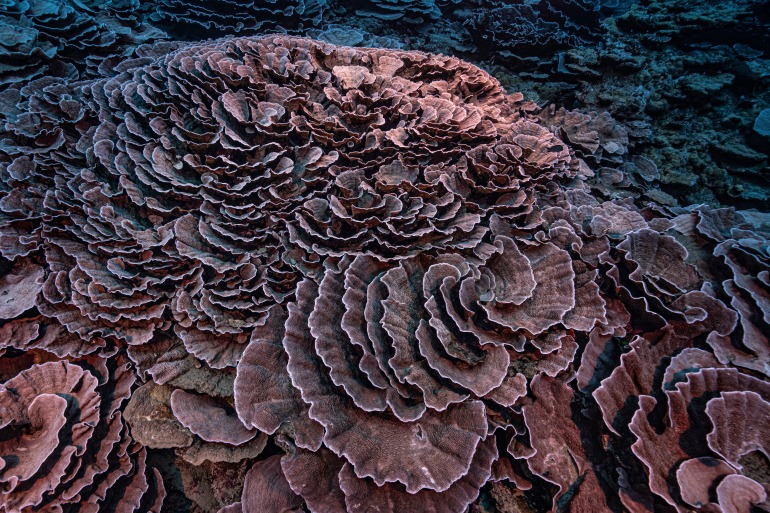 Scientists have discovered a pristine, 3-km (1.8-mile) long reef of giant rose-shaped corals off the coast of Tahiti, in waters thought to be deep enough to protect it from the bleaching effects of the warming ocean.

The reef, which lies at depths of more than 30 metres (100 feet), probably took around 25 years to grow. Some of the rose-shaped corals measure more than 2 metres in diameter.

“It was magical to witness giant, beautiful rose corals which stretch for as far as the eye can see. It was like a work of art,” said French photographer Alexis Rosenfeld, who led the team of international divers that made the discovery.

Most of the world’s known coral reefs are in warmer waters at depths of up to 25 metres, UNESCO said. The reef off Tahiti lies in the “twilight zone” 30 to 120 metres below the surface where there is still enough light for coral to grow and reproduce.

Bleaching is a stress response by overheated corals during heat waves during which they lose their colour, with many struggling to survive.

Perhaps the most famous – Australia’s Great Barrier Reef, a World Heritage-listed wonder – has suffered severe bleaching to an estimated 80% of its corals since 2016.

The discovery off Tahiti’s shores suggests there may be many more unknown large reefs in our oceans, given that only about 20% of the entire seabed is mapped, according to UNESCO scientists.

More of the ocean floor needed to be mapped to better safeguard marine biodiversity, Barbiere said.