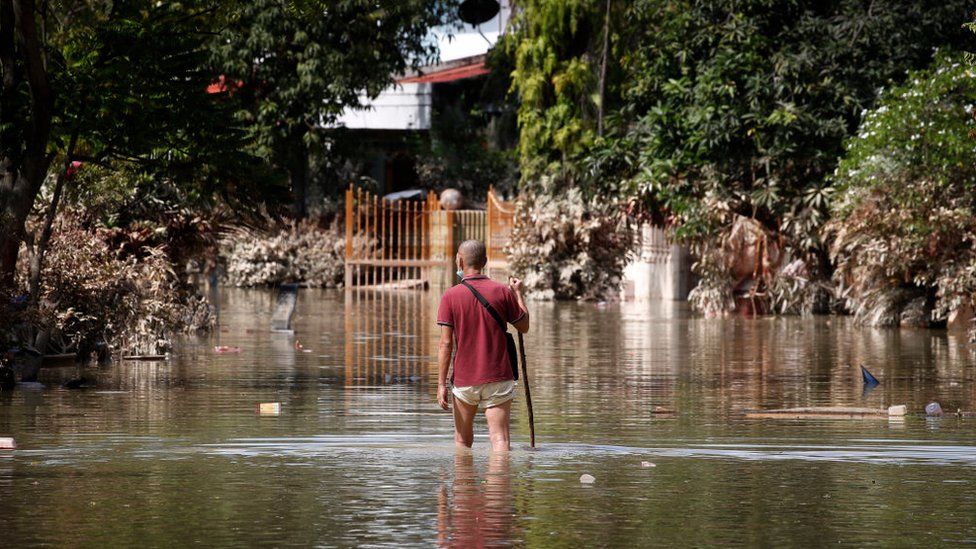 Is the progress that was made at the COP26 Glasgow climate summit already in jeopardy because of challenges in the year ahead?

2021 was a momentous year for climate change.

As well as a host of extreme, destructive events influenced by rising temperatures, the past 12 months have seen unprecedented political engagement on the issue, culminating in the COP26 summit in Glasgow in November.

Progress was undoubtedly made and the overall thrust of the meeting was towards more rapid action on a whole host of measures to curb emissions.

But there are now growing concerns that this momentum may dissipate over the coming months.

The most grievous blow comes from the US.

The potential failure of President Biden to get his Build Back Better act through Congress would significantly impact the ability of the US to meet the tough climate targets that the White House has committed to.

It would also hugely affect the relatively unified approach to climate change on display among world leaders at COP26.

“Everything that Biden pledged, led to this relatively good atmosphere and a sense of momentum in Glasgow,” said Dr Joanna Depledge, a fellow at the Cambridge Centre for Environment, Energy and Natural Resource Governance.

“But these were just promises, he needs to get the bill through Congress. And it’s now looking increasingly dicey. He can do some things with executive orders, but that certainly isn’t the kind of sustained institutional climate legislation change that we’re really looking for.”

“I think the situation to us, is critical.”

The despair among many in the US over the possible failure of President Biden’s bill will also have knock-on effects throughout the world. This will certainly be the case in China, a country smarting from the perception that it flexed its political muscle in Glasgow to get its way. Biden’s political difficulties with the bill are seen as more evidence that the “West is declining”.

“I am worried 2022 will see a fuller display of geopolitical tension dominating the climate agenda,” said Li Shuo, from Greenpeace East Asia.

He is also concerned that the mooted introduction of carbon taxes on imported goods into Europe could elevate a sense of unfairness and frustration in Beijing.

“The Chinese side will see how they are treated vis-a-vis others and make its judgment on whether the game is fair, and most importantly, if it is about the environment at all, or just geopolitics and trade,” he told BBC News. Overall, I am looking at a more turbulent year ahead. The years before the Paris agreement were an example of geopolitics helping the climate agenda forward. What lies ahead may be the opposite.”

This pessimistic outlook is echoed by the fact that next year’s COP is being held in Egypt, and the one after that in the United Arab Emirates (UAE).

“Neither of these countries could be described as climate leaders,” said Prof J Timmons Roberts from Brown University in Rhode Island, US. The good side is that COP27 will be in a developing country, and some issues like loss and damage [who pays for the impact of climate change in the worst affected countries, and how it is paid] may get more traction, but on the issue of emissions reductions, it’s not clear that they’re going to be leaders.”

Another key concern heading into 2022 is that some countries may simply ignore aspects of the Glasgow climate pact that they don’t like.

One key measure in the deal was the request for all countries to “revisit and strengthen” their national climate pledges by the time delegates gather in Egypt late in 2022.

Despite agreeing to this, a number of countries now say they simply won’t update their plans, among them Australia and New Zealand. New Zealand’s climate minister James Shaw told national media that this provision really only applied to large emitters like India, China, Russia and Brazil which hadn’t significantly strengthened their plans in time for Glasgow.

However, there are also some positive developments in the offing that could make a significant difference to the general mood around climate change.

During COP26, the UK, EU, US, Germany and France agreed to pay $8.5bn to help South Africa abandon coal. Now, those close to the negotiations say that two new deals to help India and Indonesia move away from the most carbon-intensive energy source are in the pipeline.

These will be expensive, running into the tens of billions, but if they happen, they would represent a massive step away from fossil fuels. These types of arrangements, and the commitment to doubling adaptation finance made by richer countries will be key to progress in 2022, say officials.

Another positive is that the UK’s presidency continues right up to next November when Egypt takes over.

COP26 President Alok Sharma has made it clear that he intends to push forward over the coming months in efforts to ensure that the agreements secured in Glasgow on deforestation, coal, finance and cars will start to be implemented.

Mr Sharma’s background as an auditor will come in handy in making sure there’s no slippage over the integrity of the commitments made.

“The UK, as hosts of COP26, spent the last two years working tirelessly with countries to build trust, which ultimately allowed us to deliver the Glasgow climate pact,” he told BBC News. “We will continue in the same vein through 2022 to make sure countries keep their promises, re-visit their emissions reductions targets, get finance flowing, and deliver on the many commitments made during the two weeks of the summit.”

Another positive is the fact that Germany will chair the G7 group of countries. The co-leader of the German Green party is now the country’s foreign minister, so climate will remain high on the international diplomatic agenda.

Infrastructure investment in the wake of the Covid pandemic, especially in middle income countries, also offers a great chance to lock in significant action to limit emissions.

The final agreement on the rules for carbon markets, agreed in Glasgow, has coincided with a record rise in the price of carbon permits in Europe and the UK.

While this has downsides, a sustained high carbon price could significantly speed up a transition to cleaner sources of energy.

But, as ever, global events could see all these potential positives quickly pale.

Disputes between Russia and Ukraine, China’s disengagement and a drubbing for the Democrats in mid-term elections in the US could all derail or at least delay any further progress on climate change.

And stalling or taking small steps right now would be a disaster for efforts to keep the rise in global temperatures under 1.5C this century.

However, the climate negotiations process is highly unpredictable – and even when things appear to be at their darkest, countries are often able to make sufficient compromises to keep things moving forward.

Certainly the COP26 president says he’s determined to push ahead and that the UK can be a role model for others.

“As we look ahead, the most pressing issue is the timescale on when this action takes place and the reality is that the world needs to act at a much faster pace.”

“I believe we will reach a net zero world, and the UK is leading the way through our own actions such as rapidly expanding our renewables sector and working to eliminate the use of coal from our electricity generation in 2024, the question is whether that will be fast enough to avoid the worst effects of climate change.”