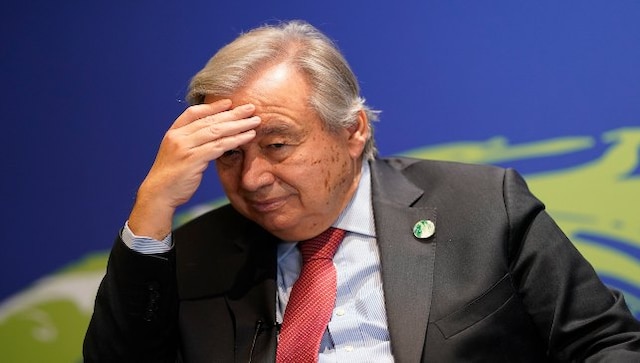 UN chief Antonio Guterres has told the Associated Press news agency that the goal of limiting global warming to 1.5C is on “life support”.

He said the COP26 summit would probably not see governments make the pledges needed to cut greenhouse gas emissions by enough.

Pressure is mounting for countries to strike a meaningful deal before the summit ends on 12 November.

But the UN secretary-general also said hope remained “until the last moment”.

Scientists say that limiting global temperature rises to 1.5C will help humanity avoid the worst climate impacts. This is compared to pre-industrial temperatures.

At Paris in 2015, world leaders pledged to try to keep the world from warming by more than between 1.5C to 2C through sweeping greenhouse gas emissions cuts. Latest projections are for a rise of 2.7C.

Mr Guterres warned that promises to reduce emissions were meaningless while governments continued to invest in fossil fuels.

He called the announcements made so far in Glasgow “far from enough”, adding: “We know what must be done.”

Earlier, COP26 President Alok Sharma warned that “time is running out” to close a deal before the summit ends on Friday evening. He called on negotiators to find solutions to difficult issues.

“Whilst the window on keeping 1.5 within reach is closing, it is still possible to get there,” he said.

Mr Sharma also said more work was needed on Article 6, which is about carbon markets and how countries balance their fossil fuel use.

COP26 is the biggest climate change conference since landmark talks in Paris in 2015. Some 200 countries are being asked for their plans to cut greenhouse gas emissions – which cause global warming – by 2030.

In other COP26 developments on Thursday: