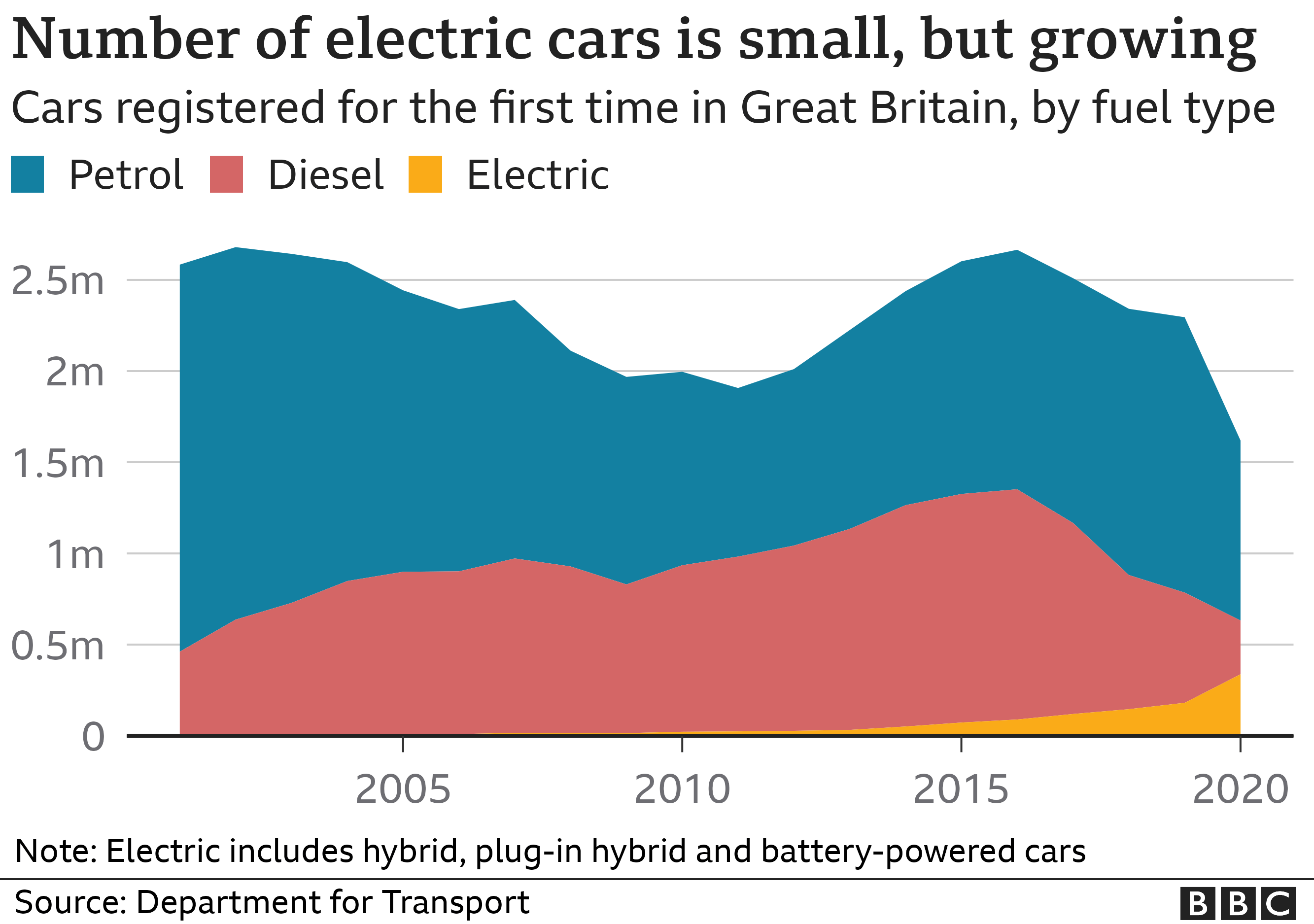 Climate change: Is the UK on track to meet its targets?

The UK has committed to reduce its greenhouse-gas emissions to net zero by 2050.

Net zero is the point at which the country is taking as much of these climate-changing gases out of the atmosphere as it is putting in.

But a group of experts that advises the government says Boris Johnson’s government has credible policies in place to deliver only about a fifth of this cut.

Successive governments have been relatively successful in cutting emissions from energy – they fell by 40% between 1990 and 2019, with a big chunk of this coming from closing coal-fired power stations and spending money on solar, wind and nuclear energy.

The UK is a world leader in offshore wind. It currently has capacity of about 10GW, which the government has promised to quadruple by 2030. An increase to 40GW would generate enough energy to power every home in the UK.

The increase is achievable, but energy companies are worried the price they are paid for wind energy is dropping rapidly – this squeezes their revenues and could limit further investment.

There will also need to be much more energy storage for times when the wind does not blow.

The Committee on Climate Change (CCC) has also advised the government that all gas-fired power stations where carbon is emitted and not captured should be phased out by 2035, but no formal decision has been taken.

Boris Johnson has set a target for all of the UK’s electricity to come from clean sources by 2035.

The government has also promised a decision on investment in one nuclear power plant before 2024.

Cars and taxis accounted for 16% of UK emissions in 2019 and, in a bid to cut this, the government says no new petrol and diesel cars will be sold from 2030.

The government has not introduced a scrappage scheme to encourage people to buy electric vehicles, but a £2,500 grant is available for fully electric cars costing less than £35,000.

The move to electric will also require huge growth in publicly accessible charging points. Their number has been rising but not fast enough last year to keep up with the growing number of electric vehicles.

Britain now has about 25,000 charging points but the Competition and Markets Authority says it could need 10 times as many before 2030.

To encourage people out of their cars, the government has promised to double cycling rates from 2013 levels by 2025 and build a “world class” cycling network by 2040.

It has spent £338m on walking and cycling infrastructure in England, but while the pandemic increased cycling rates, it remains unclear whether the effect will be permanent.

Before the pandemic, flying made up about 7% of overall emissions and shipping about 3%, but we do not know a great deal about how the government plans to reduce them and there are no specific targets for these sectors.

The CCC says the government needs to freeze demand for flights and should publish a strategy to cut emissions from freight transport, aviation and shipping.

But the government says people can keep flying, and claims that technology yet to be developed should allow domestic flights to be almost emissions free by 2040, and international aviation to be near zero-carbon by mid-century.

Housing accounts for about 14% of the UK’s greenhouse-gas emissions, mostly because of gas-boiler heating systems and poor insulation, the CCC says.

The government has committed to installing 600,000 heat pumps a year by 2028. These transfer heat from the ground, air or water around a property into its heating system, and start at £6,000.

Grants of £5,000 will be available for homeowners to install a heat pump from April 2022. The government has allocated £450 million for this over three years.

But environmental groups estimate this will only cover a maximum of 90,000 pumps and have questioned how the government will meet its target (which the CCC says should be higher anyway).

The scheme is part of a wider package – worth £3.9 billion – to decarbonise heat and public buildings.

The CCC also says insulation rates are only about a third of what they need to be to cut energy consumption.

Earlier this year, the government scrapped its grant scheme supposed to help people with the cost of insulating their homes. Its new package includes help with insulation but this will be limited to low-income households.

The government has yet to publish the part of its food strategy that looks at the environmental impact of people’s diets.

The CCC says there are signs consumers would be willing to change what they eat.

A new study by the National Food Strategy shows daily meat consumption in the UK has fallen by 17% in the last decade.

Trees have an important role in removing carbon emissions from the atmosphere – and the government has an ambitious target to plant 30,000 hectares of trees a year by 2025 (a hectare is a bit bigger than a football pitch).

Annual tree planting was close to this figure back in the late 1980s (most of it in Scotland) but it has not risen above 15,000 hectares UK-wide since 2001.

Tree-planting is a devolved issue, and Scotland has nearly twice as much coverage as England.

The government wants to treble planting in England during this Parliament, but overall it has a lot of ground to make up by 2025. A sharp acceleration will be needed to meet this target, and there are questions about how the trees will be cared for after they are planted.

Hydrogen is a low-carbon fuel that could be used for transport, heating, power generation or energy storage – and the government wants to have a capacity of 5GW of hydrogen production by 2030.

But in an industry in its infancy – there is almost no low-carbon production of hydrogen in the UK or globally at the moment – this ambition is pretty hard to gauge.

The government admits it will need “rapid and significant scale-up” in the coming years.

The ability to capture carbon before it is released or take it out of the atmosphere and store it will be essential for the UK to reach net zero by 2050.

The government is aiming to capture and store 10 million tonnes of CO2 a year by 2030 – but the CCC says it should be aiming for more than twice that much.

The bigger challenge is that the technology is still emerging and is very expensive.

But there are some projects planned, including one in north-east Scotlandthat can extract as much CO2 from the air as 40 million trees.

The government says it will cut emissions from manufacturing by about two-thirds from 2018 to 2035.

Carbon capture and the switch to hydrogen will both play a big role but considerable progress is needed in these technologies.

The government also plans to cap the amount of emissions allowed by individual sectors each year, which will reduce over time.

But it is unclear how the scheme will safeguard against just shifting production and emissions to other countries.

2021-10-19
Previous Post: COP26: Does a climate summit need 25,000 people? And more questions
Next Post: U.S. Democrats scramble to hammer out climate legislation ahead of Glasgow talks