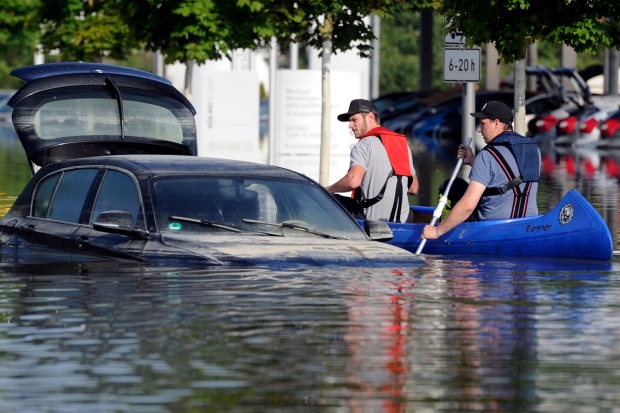 A new study shows that the percentage of the global population at risk from flooding has risen by almost a quarter since the year 2000.

Satellite images were used to document the rise, which is far greater than had been predicted by computer models.

The analysis shows that migration and a growing number of flood events are behind the rapid increase.

By 2030, millions more will experience increased flooding due to climate and demographic change, the authors say.

Flooding is the environmental disaster that impacts more people than any other, say researchers.

That view has echoed around the world in recent weeks, with huge inundations destroying lives and property.

In Germany and China, record downpours overwhelmed defences, amid arguments about levels of preparation.

One of the challenges with flooding, according to researchers, is that most maps of where the waters will likely penetrate are based on models.

These simulate floods based on information such as elevation, rainfall and data from ground sensors.

But they have significant limitations: they fail to consider population or infrastructure changes and are unable to predict random events such as dam breaches.

So when Hurricane Harvey hit Texas in 2017, around 80,000 homes were flooded that were not on government risk maps.

In this new study, researchers looked at daily satellite imagery to estimate both the extent of flooding and the number of people exposed to over 900 large flood events between 2000 and 2018.

They found that between 255 and 290 million people were directly affected – and between 2000 and 2015, the number of people living in these flooded locations increased by 58-86 million.

This represents an increase of 20-24% in the proportion of the world population exposed to floods, some 10 times higher than previous estimates.

The increase was not evenly spread throughout the world. Countries with increased flood exposure were mainly in Asia and sub-Saharan Africa.

In European and North American nations, the risk was stable or decreasing.https://flo.uri.sh/visualisation/6919473/embed?auto=1

Around 90% of the flood events observed by the scientists were in South and Southeast Asia, around the basins of major rivers including the Indus, Ganges-Brahmaputra and the Mekong.

“We were able to capture a lot of floods in Southeast Asia more than other places, because they’re so slow-moving and so the clouds move, and we’re able to get a really clear image of the flood,” explained lead author Dr Beth Tellman from the University of Arizona and chief science officer at Cloud to Street, a global flood-tracking platform.

“But there was also just a lot of flooding, really high impactful flooding in southern Asia and Southeast Asia. There’s also a large human population that settled near rivers for really important reasons [such as] agriculture,” Dr Tellman explained. But she added that this “also, unfortunately exposes people to a lot of flooding events”.

One of the puzzling aspects of the research is why people in many countries are moving into flood prone areas rather than away from them.

While the global population grew by over 18% between 2000 and 2015, in areas of observed flooding, the population increased by 34%.

Dr Tellman says that one aspect of this growth is related to climate change, which is changing the locations of flood plains to encompass more people. But economics also plays an important role.

“Places that have flooded tend to be really cheap land for informal development, so in Guwahati, India, and Dhaka in Bangladesh, we see people moving in, and so flooded areas then become settled,” she said.

“It may not be people’s choice to live in those areas because they might not have a lot of agency. If there were really good public housing programmes or other options, I think people probably wouldn’t choose to settle in a hazardous area.”

The authors say that the key drivers of flooding are heavy rainfall, tropical storms or surges and snow and ice melt. Dam breaks represented less than 2% of floods but had the highest increased incidence in terms of population exposed.

Looking to the future, the authors say they expect the numbers at risk of flooding to continue to rise.

They estimate that by 2030, there will be an extra 25 countries experiencing increasing floods in addition to the 32 being impacted at present.

“We estimate that an additional new 179.2 million people will be exposed to floods by 2030 in 100-year zones and most of that is due to demographic change,” said Dr Tellman.

“Around 50 million people extra people will be exposed to inundation, we think, due directly to climate change explicitly.”

The flooding database behind the research, said to be the largest and most accurate yet compiled, will be openly hosted here.

The study has been published in the journal Nature.