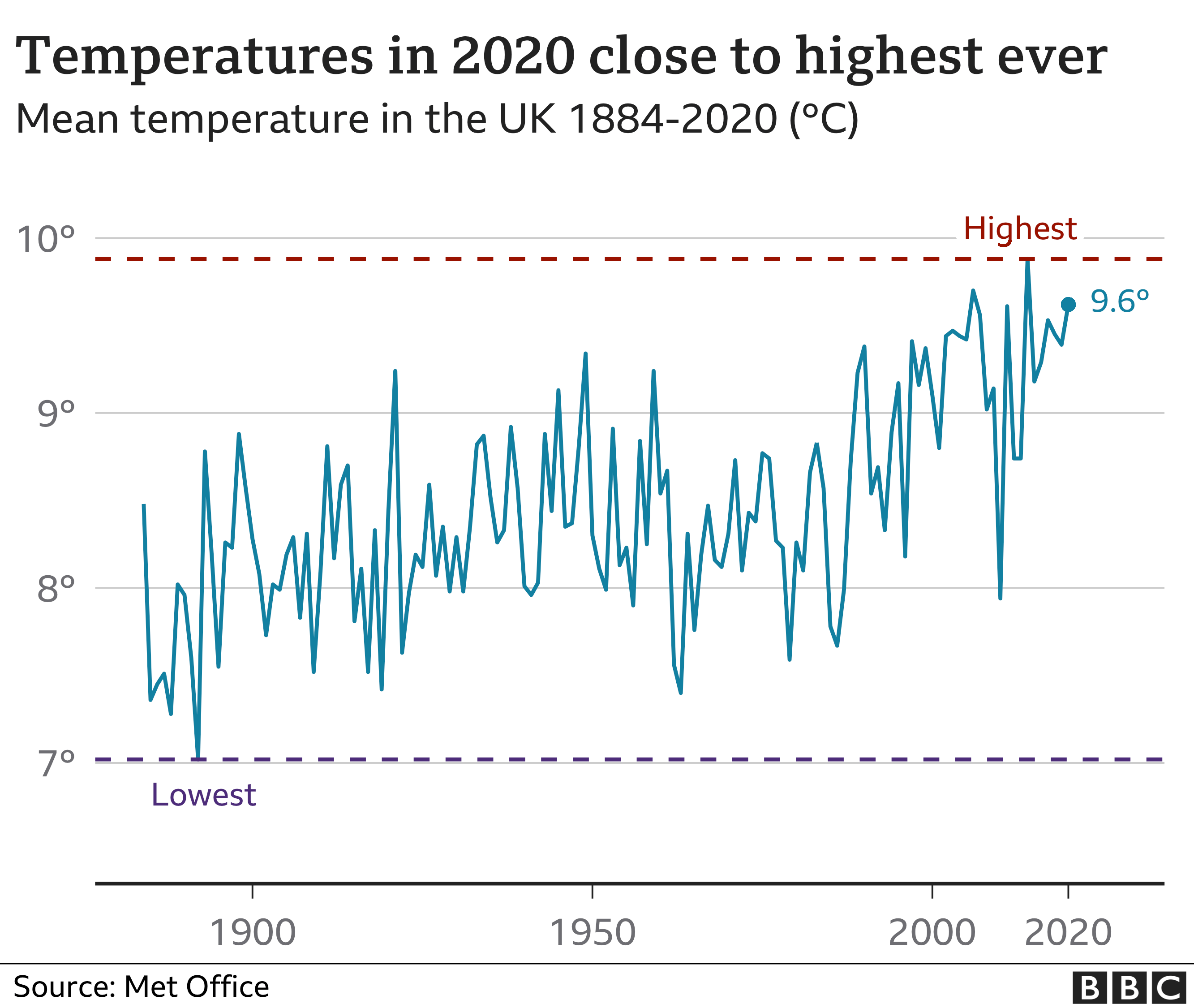 The UK is already undergoing disruptive climate change with increased rainfall, sunshine and temperatures, according to scientists.

The year 2020 was the third warmest, fifth wettest and eighth sunniest on record, scientists said in the latest UK State of the Climate report.

No other year is in the top 10 on all three criteria.

The report’s lead author Mike Kendon, climate information scientist at the UK Met Office, told BBC News: “A lot of people think climate change is in the future – but this proves the climate is already changing here in the UK.

“As it continues to warm we are going to see more and more extreme weather such as heatwaves and floods.”

The report says the UK has become hotter, sunnier and rainier:

And in a separate report, scientists warned that greenhouse gas levels were already too high “for a manageable future for humanity“.

Liz Bentley, head of the Royal Meteorological Society, said that even if governments could achieve the challenging outcome of limiting the global temperature rise to 1.5C – which looks very unlikely – that would still lead to a 10% increase in the amount of water the air can hold.

“In the UK,” she said, “we are likely to see temperatures of 40C. As we get 1.5C warming, that’ll be something we see on a regular basis.

“People don’t realise that even a small temperature rise of 0.1 or 0.2 degrees overall can make a huge difference – especially in the frequency and intensity of extreme events.

“We had roads melting last year, rails start to buckle, electric cabling starts to buckle. We often say we’d like a climate like the Med, but people were soon complaining they were too hot – not just in the day but especially at night.

“It often takes a massive high-impact event to change attitudes to the climate – so let’s hope what’s been happening recently with extreme weather will raise the will to tackle the problem.”

The State of the Climate report also indicates that plants are responding to the changes in climate. Leaves appeared on average 10.4 days earlier than the 1999-2019 baseline for a range of common shrub and tree species.

While the signs of spring got earlier, so did the indications of autumn – trees in 2020 went bare on average 4.3 days earlier than the baseline.

Sir James Bevan, the head of the Environment Agency, said there were more than five million homes at risk of flooding in England – and “that risk is rising as the climate changes”.

“We can’t remove the risk but we can reduce it,” he told BBC Radio 4’s Today programme.

He said the EA’s thinking needed to change faster than the climate, and its new strategy was not only about preventing floods, but also making communities more resilient to flooding when it does happen so that it does less damage.

And Sir James said the government has made its biggest investment yet in flood defences, with £5.2bn of funding to be spent on building 2,000 new flood defence schemes over the next six years.

Meanwhile, a new paper from the Climate Crisis Advisory Group, founded by the former UK chief scientist Prof Sir David King, asks whether rapid heating in the Arctic region is driving changes in the jet stream in a way that influenced the recent weather extremes.

The jet stream is a core of strong winds travelling west to east about five to seven miles above the Earth.

The new paper said: “We are simultaneously witnessing weather disaster in Germany, the highest temperatures for June in Finland and the US, the catastrophic heatwave in British Columbia, and extreme heat in Siberia.

“These are all outlier events that exceed what one would expect if it were ‘only’ a 1.2C warming impact (that’s the amount the Earth has already warmed since pre-industrial times).

“Greenhouse gas levels are already too high for a manageable future for humanity.”

The paper, which has not been peer-reviewed, urges governments to start removing greenhouse gases at scale from the atmosphere.