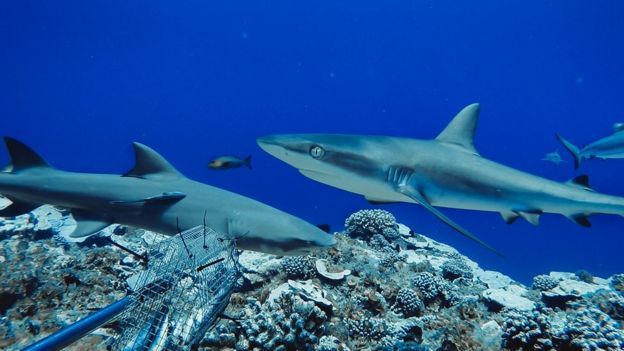 Sharks are rarely seen at almost one in five of the world’s coral reefs, a major study has found.

The crash in shark numbers, caused largely by over-fishing, could have dire consequences for corals struggling to survive in a changing climate, researchers have said.

They did best in places where shark fishing was controlled, or where marine sanctuaries had been created.

Dr Mike Heithaus of Florida International University, US, said: “At a time when corals are struggling to survive in a changing climate, losing reef sharks could have dire long-term consequences for entire reef systems.”

The research, published in the journal Nature, and part of the Global FinPrint study, reveals widespread loss of reef sharks across much of the world’s tropical oceans.

Species such as grey reef sharks, blacktip reef sharks, and Caribbean reef sharks were often missing from reefs where they would historically have been found.

To carry out the study, underwater cameras were fitted on 371 reefs across 58 countries from the Central Pacific to the Bahamas. Bait was attached to a pole at the front of the cameras to attract any nearby sharks.

Almost no sharks were detected on any of the 69 reefs of six nations: the Dominican Republic, the French West Indies, Kenya, Vietnam, the Windward Dutch Antilles and Qatar.

But the researchers said there were grounds for hope. By regulating how sharks are fished, populations have a chance to recover.

Dr Aaron MacNeil of Dalhousie University, Canada, said, “From restricting certain gear types and setting catch limits, to national-scale bans on catches and trade – we now have a clear picture of what can be done to limit catches of reef sharks throughout the tropics.”

Many of the world’s shark species are threatened by over-fishing, often for their meat and fins, or because they are unintentionally trapped in fishing gear.

Estimates suggest that 100 million sharks are killed by people each year.

Comments are closed, but trackbacks and pingbacks are open.