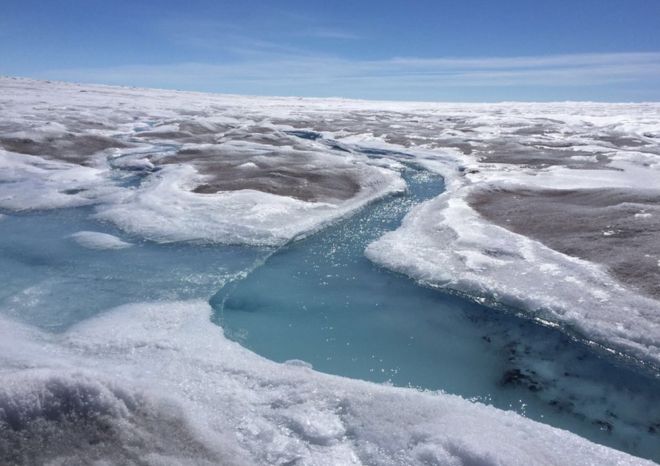 The US has banned mention of the climate crisis in trade talks with the UK, an analysis of leaked documents has revealed.

In negotiating a trade deal, the UK acknowledges that there will be pressure to ensure that any agreement meets its climate commitments. But to the anger of environment groups, analysis of a 451-page dossier leaked last month confirms that the Trump administration has told the UK that the climate crisis cannot be mentioned.

“The fact that the US has banned even the mention of climate change says it all,” said Nick Dearden, director of Global Justice Now, which first drew attention to the dossier’s existence. “Trump is a climate [change] denier, and any US deal is going to make it much harder for Britain to meet its already tepid commitments.”

The dossier made explosive reading when it was highlighted by Labour during the election campaign. Britain’s security agencies are now investigating whether hackers targeted a personal Gmail account to obtain it. Jeremy Corbyn said it proved the NHS was “on the table” in future talks. But environmental groups now point out that the dossier also sheds light on how far the UK will have to bend to the White House on the environment.

Either we allow policies which will further devastate the environment, or the deal is dead’Doug Parr, Greenpeace

One memo reads: “UK inquired about the possibility of including reference to climate change in a future UK-US trade agreement given that the UK has a strong historical stance on climate change and pushed strongly for the Paris agreement. UK also highlighted the pressure for this that would come from civil society and NGOs. US responded emphatically that climate change is the most political [sensitive] question for the US, stating it is a ‘lightning rod issue’, mentioning that as of 2015, USTR [US trade representatives] are bound by Congress not to include mention of greenhouse gas emission reductions in trade agreements. US stated this ban would not be lifted anytime soon.”Advertisement

The Greenpeace policy director, Dr Doug Parr, said: “If ‘climate change’ are taboo words for Trump’s negotiators, that’s just a hint of the crushing pressure our environmental standards will come under in any trade deal with the US. For US industrial lobbies, this deal is the long-awaited chance to get rid of the rules banning things like chlorinated chicken and hormone-grown beef from our shelves, while leaving our climate and energy policies at the mercy of trade disputes.”

Dearden added that trade deals today tend to be bad for the environment: He said that the abandoned EU-US deal had a clause that would have made it much harder for the government to discriminate between fossil fuels and renewables.

“Recent trade deals with North America have increased climate-destructive industrial agriculture and the flow of tar-sands oil into Europe. But in a US-UK deal, US negotiators have been clear that they’re not remotely interested in even listening to discussion of climate change. Either we allow policies which will further devastate the environment, or the deal is dead.”

The dossier also shows that the US wants the UK to agree to an investor-state dispute settlement (ISDS) system, which allows foreign corporations to sue governments outside of the national legal system.

“There is value in including ISDS in an investment chapter,” one memo records. “Even if disputes do not proceed to claims, the presence of a backstop is invaluable in resolving things.”

Dearden said: “The icing on the cake is the awful ‘corporate court’ system, which allows big business to sue governments in secret tribunals, without the right of appeal.

“Only this year, an energy corporation has sued the Netherlands in one such court because the Dutch government proposed to phase out coal production and use. US negotiators have been clear that they would want the most red-blooded corporate court system available in a US-UK trade deal, allowing the massive US fossil fuel industry to bully and threaten the British government over its climate policy. This will lock in climate devastation and undermine any promises Johnson makes on environmental protection.”

A spokesman for the Department for International Trade said it did not comment on leaks: “We will publish our own negotiating objectives for a future trade agreement with the US in due course. The UK leads the world in tackling climate change, as the first major economy to pass new laws for net-zero emissions by 2050. The prime minister has set out his vision to ensure Britain has the most ambitious environmental programme of any country on earth.”Advertisement

But Parr was sceptical. “So far, all we have to set against these powerful industries backed by the White House is Boris Johnson’s promise that standards will be maintained – that’s nowhere near enough. The UK government should set in law a guarantee that environmental and food standards will never be weakened in future trade deals, and that policies to tackle the climate emergency will never be subjected to secretive corporate courts.”

2019-12-23
Previous Post: Amazon women defending their Amazon homeland
Next Post: Food ‘made from air’ could compete with soya