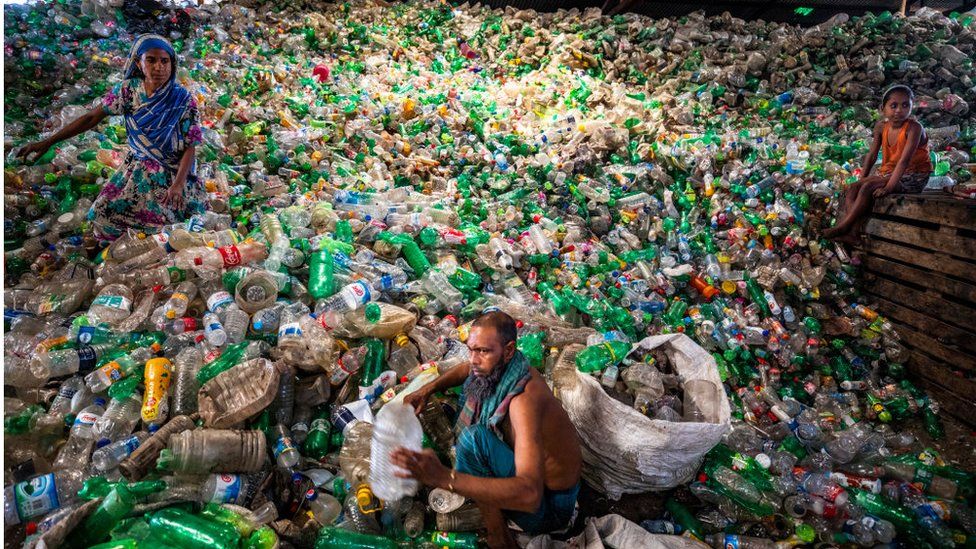 Samantha Jenkins was studying a number of types of fungus in a research project for her company, when one of the fungi made a bid for freedom.

“Imagine a jar full of grain with a kind of lump of mushroom coming out of the top,” says the lead biotech engineer for bio-manufacturing firm Biohm.

“It didn’t look particularly exciting or fascinating. But as soon as it was cracked open, it was very, very cool.”

The fungus had eaten its way through the plastic sponge intended to seal it in, breaking it down and assimilating it like any other food.

The aim of the project was to evaluate a number of strains of fungus for use in bio-based insulation panels, but the hungry fungus has taken them in another direction.

Biohm is now working to develop the strain to make it an even more efficient digester that could potentially help get rid of plastic waste.

It’s no secret that single-use plastic waste is a vast problem: by 2015, according to Greenpeace, the world had churned out 6.3 billion tonnes of virgin plastic, of which only 9% has been recycled. The rest was burned in incinerators or dumped.

Things are improving, with more than 40% of plastic packaging now recycled in the EU, and a target of 50% by 2025.

But some types of plastic, such as PET (polyethylene terephthalate) which is widely used for drinks bottles, are hard to recycle by traditional means. So might biological methods be the answer?

Ms Jenkins is testing their fungus on PET and polyurethane.

Others have also had some success.

Scientists from the University of Edinburgh have recently used a lab-engineered version of the bacteria E. coli to transform terephthalic acid, a molecule derived from PET, into the culinary flavouring vanillin, via a series of chemical reactions.

“Our study is still at a very early stage, and we need to do more to find ways to make the process more efficient and economically viable,” says Dr Joanna Sadler, of the university’s School of Biological Sciences.

“But it’s a really exciting starting point, and there’s potential for this to be commercially practical in the future after further improvements to the process have been made.”

Meanwhile, a team at the Helmholtz Centre for Environmental Research-UFZ in Leipzig is using a bacterium originally found in a local rubbish dump to break down polyurethane.

Called Pseudomonas sp. TDA1, the bacterium consumes around half the plastic to increase its own biomass, with the rest released as carbon dioxide.

Like other plastic-eating organisms, Pseudomonas breaks down the polyurethane using enzymes; and the team has now carried out a genomic analysis of the bacterium with the aim of identifying the particular genes that code for these enzymes.

But some question whether such techniques will ever be commercially viable.

“Enzyme or microbial conversion of PET to its constituent building blocks is interesting science and needs to be explored. However, the technology will have to compete with proven, commercial conversion technologies using mundane, less exciting water-catalyst systems,” says Prof Ramani Narayan of Michigan State University.

Furthest down the road to commercialisation is probably Carbios, a French company using an engineered version of an enzyme originally found in a compost heap to break down PET.

After teaming up with some big names in consumer products, including L’Oreal and Nestle, the company recently announced that it has produced the world’s first food-grade PET plastic bottles produced entirely from enzymatically recycled plastic.

And unlike most recycling methods, the enzymes can deal with coloured PET.

However, the bottles produced by this process are almost twice as expensive as those that use petrochemicals.

Nevertheless, Mr Stephan says the technology has the potential to match the low costs of traditionally made bottles.

“Enzymes may be very useful because they are very specific, and also they don’t care about contamination, if the packaging is still dirty. And they don’t use a lot of energy.

“The other thing is that it can be scaled up and down conveniently. Enzymes would have the advantage that they can consist of small units that would have a low carbon footprint, and they could be outside metropolitan areas in developing countries or remote places.”

However, he believes they are no panacea.

“PET bottles can be recycled using this enzyme back to new bottles, but unfortunately PET bottles are very crystalline and very resistant to enzyme degradation, so the company had to introduce an extra pre-treatment where they actually put in a lot of extra energy to melt the material and extrude it to reduce the crystallisation,” he says.

“After that, you can degrade it with the enzyme – but economically, and also in terms of carbon footprint, this doesn’t make a lot of sense in my opinion.”

And while things may improve, enzymatic recycling currently has a very limited range, as Mr Stephan concedes.

“We have developed technologies for the end-of-life of two polyesters only, representing around 75 million tonnes of annual production, compared to a global plastics production of around 350 million tonnes,” he says.