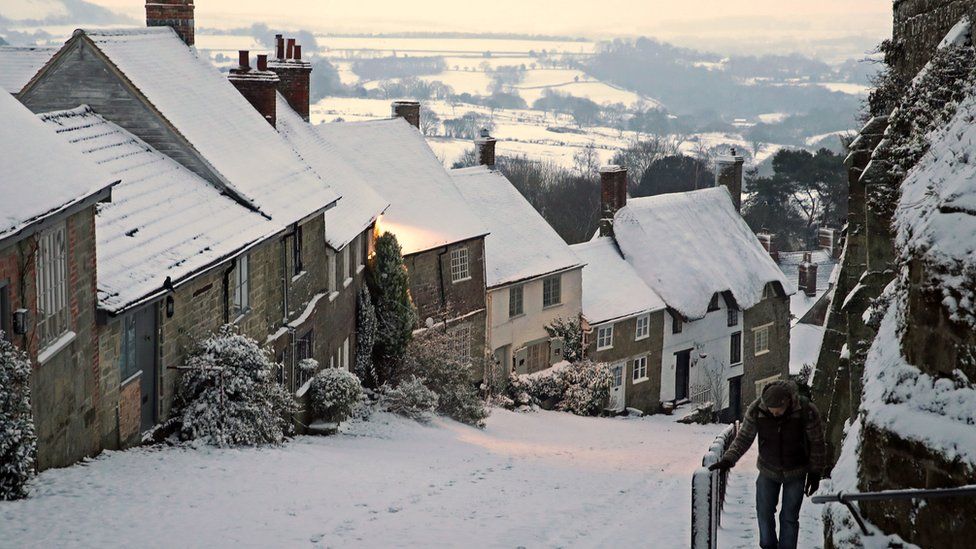 Climate change: Snowy UK winters could become thing of the past

Snowy winters could become a thing of the past as climate change affects the UK, Met Office analysis suggests.

It suggests by the 2040s most of southern England could no longer see sub-zero days. By the 2060s only high ground and northern Scotland are still likely to experience such cold days.

The projections are based on global emissions accelerating.

It could mean the end of sledging, snowmen and snowball fights, says Dr Lizzie Kendon, a senior Met Office scientist who worked on the climate projections.

“We’re saying by the end of the century much of the lying snow will have disappeared entirely except over the highest ground,” she told Panorama.

If the world reduces emissions significantly the changes will be less dramatic, the Met Office says.

The average coldest day in the UK over the past three decades was -4.3 Celsius.

If emissions continue to accelerate, leading to a global temperature rise of 4C, then the average coldest day in the UK would remain above 0 Celsius across most of the country throughout winter.

Even if global emissions are reduced dramatically and world temperatures rise by 2C, the average coldest day in the UK is likely be 0 Celsius.

The Met Office says these temperatures are subject to variation and some years may see days colder than the average. Its projections explore how the UK’s climate might change.

“But within that, we get this shift towards more extreme events, so more frequent and intense extremes, so heavier rainfall when it occurs.”

The Met Office says we are already seeing dramatic changes in the UK climate.

“The rate and nature of the climate change that we’re seeing is unprecedented,” says Dr Mark McCarthy of the Met Office’s National Climate Information Centre.

Most of the country has already seen average temperatures rise by 1C since the Industrial Revolution and we should expect more of the same, he warns.

That may not sound like much, but even these small changes in our climate can have a huge impact on the weather and on many plants and animals.

The Met Office says there could be significant temperature rises in the decades ahead for both winter and summer.

It says the biggest increases will be in the already warmer southern parts of the UK. At the same time extreme weather is expected to become more frequent and more intense.

Heatwaves are likely to become more common and last longer, with record temperatures being exceeded regularly.

Not every summer will be hotter than the last, the Met Office says, but the long-term trend is steadily upwards, particularly if emissions remain unabated.

If the world succeeds in reducing emissions, these temperature rises will be considerably smaller.

The level of detail in the models mean it is possible to see how the climate might change in neighbourhoods across the country.

Hayes in west London, for example, is likely to see some of the most dramatic temperature rises of all, the new data suggests.

If global emissions reduce, this temperature rise will not be so severe.

Summers might not just be hotter, they could be drier too, the Met Office predicts. Summer rain could become less frequent, but when it does rain it is likely to be more intense.

The combination of longer dry periods with sudden heavy downpours could increase the risk of flooding because dry ground doesn’t absorb water as well as damp ground.

Rainfall is expected to increase in many parts of the country in winter too, the Met Office says.

The projections suggest western parts of the UK may get even wetter under a high-emissions scenario.

Of course, some years will always buck the trend by being wetter or cooler than others – and there will be significant regional variations.

This pattern of wetter winters and more intense summer downpours across much of the country risks putting infrastructure under greater strain.

Roads, railways, reservoirs, sewers, bridges and other infrastructure is all designed for the sort of rainfall we have had in the past and much of it may need to be upgraded or even rebuilt to cope with the storms and floods to come.

The new goal is to cut the UK’s greenhouse gas emission by 68% by the end of the decade, based on 1990 levels.

Boris Johnson hopes the new targets will set an example to other nations, which will join a virtual climate pledges summit on 12 December.

This virtual event will occur in place of annual UN climate talks, which were set to have taken place in Glasgow this year, but were postponed because of Covid-19.